Dissecting the Cult of Bacon

Everywhere you turn these days, someone is waxing poetic on their love of bacon. Pictures, songs, products, demotivation posters - bacon as meme is as popular as ever. 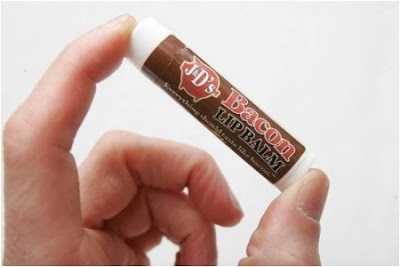 Bacon is worshiped as an ultimate indulgence or laughingly revered as necessary for brain function.
Salon.com, suggests bacon mania is rooted in an act of rebellion: eating bacon in the modern, health-conscious world is rebellious: "Loving bacon is like shoving a middle finger in the face of all that is healthy and holy while an unfiltered cigarette smolders between your lips."

But what IS bacon? Have you thought about it? 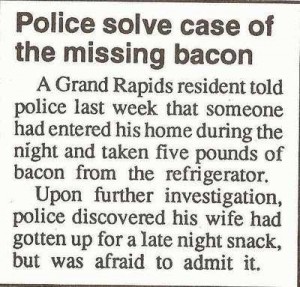 ( Seriously, 5 lbs of bacon as a late night snack? And the husband reported missing bacon to the police? )

Bacon is the belly meat of a pig ( side meat in Canada and Europe ) , preserved in a brine mixture and then either air dryed for a few weeks, or smoked. What differentiates bacon from ham is the addition of sodium nitrite in the brining solution.

Bacon brine has added curing ingredients, most notably sodium nitrite, and occasionally sodium nitrate or potassium nitrate (saltpeter); sodium ascorbate or erythorbate are added to accelerate curing and stabilize color. Flavorings such as brown sugar or maple are used for some products. If used, sodium polyphosphates are added to improve sliceability and reduce spattering when the bacon is pan fried. Today, a brine for ham, but not bacon, includes a large amount of sugar. Historically, "ham" and "bacon" referred to different cuts of meat that were brined or packed identically, often together in the same barrel.( From the Wiki )

But this is not a mutual admiration society. You might love bacon, but most assuredly - bacon does not love you back.


So, a heart attack, diabetes and cancer. Can I get a side of kidney failure with that?

Can you get bacon without the "added" nitrites and preservatives? Yes, you can - but I've only seen it at 2 grocery stores - Trader Joe's and Whole Foods Market. I almost bought some to try for this post specifically - but when I flipped the package over and discovered the sky high salt content ...I declined and put it back on the refrigerated shelf.  However, I did note that the TJ's bacon contained celery juice powder, which I thought rather odd. After a little research, I quickly discovered the reason: celery juice powder is actually high in naturally occurring nitrites - so ultimately by being processed with celery powder, TJ's bacon IS processed with nitrites - nitrites from a more natural source and not the pure chemical. A little deception there, TJ!

( As a side note on naturally occurring nitrites - you'd literally have to eat hundreds of stalks of celery to get the same nitrite load a single slice of bacon contains - so munching on celery as a snack is not any danger whatsoever! )

“No nitrites added” does not mean “No nitrites,” rather, it means, “We used celery because it is high in nitrites so now we get the benefit of nitrites and are able to claim in the ingredients we used celery and that we did not add any nitrites thereby exploiting of America’s ‘nutritionist’ culture for profit.”


I actually really like bacon. I remember it well from my "PCE" ( Pre Clean Eating ) days. I also remember Diet Coke, Krispy Kreme donuts, and my beloved Cheez-Its.

These are edible products I've come to understand that are not food.
Food is something you put in your body to nourish it that is as close to how it is originally found in Nature as possible. Not something that comes off a production line in a factory far away.

Health issues aside, bacon is edible, but not Clean. Bacon did not roam the Earth, nor is it grown from vines and trees. Bacon is a processed product, a result of treating a Clean food ( pork ) with chemicals, salt, and other preservatives.

For your health and for the continued healthy operation of your body's machine, leave the bacon meme where it belongs - on a demotivational poster. 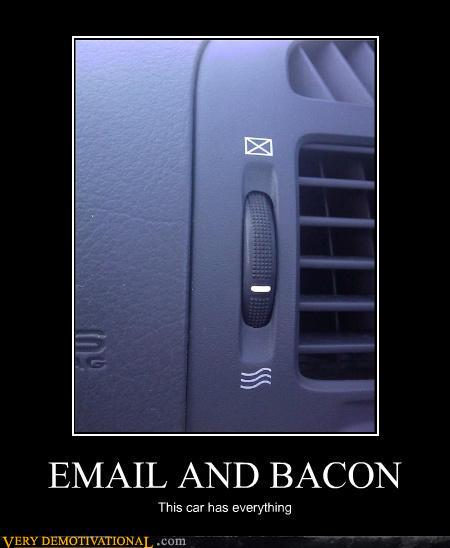