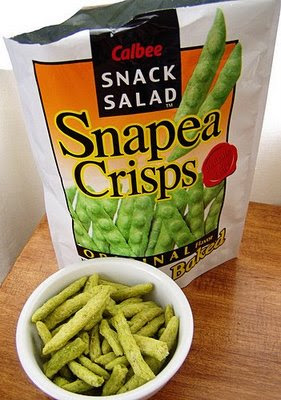 I found these little pea crisps at my local Safeway ( though I've also come to know they are also at Trader Joe's and Whole Foods, too... ) and I was eager to try some. They seemed different, and the package implied that it would be good in a salad. Since I was looking for some new salad bits...I bought a bag.

They never made it to a salad.

When I first took the Snapeas out of the bag, they looked all the world like a peapod that had been deep fried ( though the package promised they had been baked ). I examined the "beans" more closely: 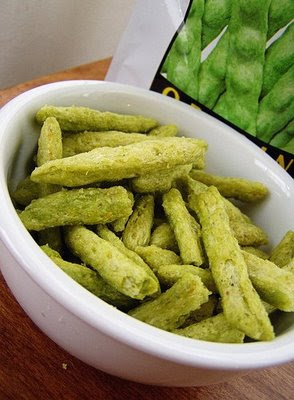 They are actually an extruded product!! The company that makes them ( Calbee ) grinds up peas with a little rice, adds a bit of salt, and extrudes the product through a die to create a bean looking product. The result is baked, and voila - the Snapea. I miss crunching small things - and with a very Clean ingredient list  ( Peas, rice, corn oil, salt ), I can munch with moderation and still stay relatively on track! With 22 pieces per serving, I fell like I've snacked. Thoroughly!

I like the taste of the Snapeas, too - a hard to describe taste - nondescript, but you definitely know you've eaten something. My husband likened it to a very bland, not particularly salty Frito. I have to admit, it does have a vaguely corn chip flavor.

Ok, I'm the first to raise my hand and say. " These are a food invented in the last 150 years. These are a processed food. There are no extruded baked pea snack bushes." However, snacks happen. Choosing a wise snack, a relatively healthy snack - well, that makes all the difference in the world.

Maybe part of the next bag will actually end up in my salad, rather than as snacky fodder...
Posted by Maura at 7:46 AM