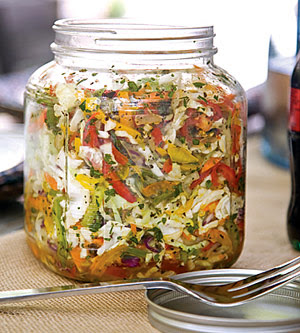 A friend was telling me about a simple coleslaw her mother used to make that had sliced cabbage and various bell peppers in it - sounded delicious! My husband's 95 year old grandmother grew up on a farm in Kansas with no electricity, and taught me to make a cole slaw that's dressing is oil, vinegar and sugar - no mayonnaise, because that would spoil! Combine the two great recipes and what do you get?

Yeah, yeah. This recipe has a minute amount of sugar in it. It is actually important, just to take the edge off the tartness of the vinegar/oil mixture. It's a small amount of sugar. If it bothers you, try switching it out for liquid stevia, or agave nectar.


1.Place slaw mix, peppers, and tomatoes in a large glass jar with lid. Shake to combine; set aside.
2.In a small bowl, combine olive oil, vinegar, sugar, salt, pepper, basil, and oregano, whisking well. Pour mixture over peppers. Close lid and shake well to coat. Allow slaw to marinate and meld at least 2-3 hours in the refrigerator before serving.
3. Store covered in the refrigerator. Slaw is best when made a day before serving.