I think it is important to not only inform people about Clean Eating, but also raise awareness about how insanely bad some foods out there are for you. It's one thing to go out to eat and enjoy a well prepared, thoughtful meal. It's quite another to unknowingly eat something that truly is hazardous to your health.

I found this wonderful round up over at Fitbie.com It is well worth the repost and a nod. This type of thing is important to know, and will definitely give you pause the next time you are tempted to eat on the go.
"What's the harm in having a Chick Fil A sandwich?"  Read and find out. 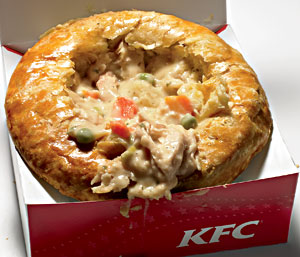 Gelatin: Hard to believe, but the stuff that gives Jell-O its jiggle comes from the collagen found inside animals’ skin and bones. In this pastry run afoul, it’s used as a gelling agent to give the “sauce” more viscosity.

“Chicken pot pie flavor”: Food processors know that if the flavor isn’t correct, sales will suffer, and that presents a formidable challenge. See, after making room for emulsifiers, stabilizers, thickeners, and preservatives, many of the natural flavors in this pie are muted. To keep from sticking a bland product on the menu, KFC turned to chemists who specialize in what food should taste like. That means that when you take a bite, you’re tasting the result of meetings and e-mails exchanged between the decision makers at KFC and the chemists trying to capture the essence of the dish they’re fabricating. Your taste buds register something like chicken and vegetables, but the driving force is actually an onslaught of chemicals derived from a trio of cheap commodity crops—corn, soy, and wheat—that have been laced with a proprietary “flavor,” steeped in common stock, and thickened with corn-derived sugars like dextrose and maltodextrin. It creates an unsettling picture of how unscrupulous processors approach food: When artificial additives create problems, the solution is to invent more artificial additives.

L-cysteine hydrochloride: Used as a dough conditioner in industrial food production, this nonessential amino acid is most commonly derived from one of three equally surprising sources: human hair, duck feathers, or a fermented mutation of E. coli. Yum.


Red 40 (natural red #40): Red 40 is a crimson pigment extracted from the dried eggs and bodies of the female Dactylopius cocus, a beetlelike insect that preys on cactus plants. It’s FDA-approved and widely used as a dye in various red foods, especially yogurts and juices. 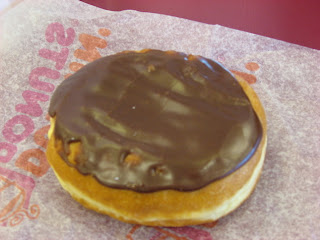 Xanthan gum: It’s not dangerous, but it is funky. Xanthan gum is a thickener and emulsifier derived from sugar through a reaction with Xanthomonas campestris, a slimy bacterial strain that often appears as black rot on broccoli and cabbage. Worldwide production of xanthan gum is about 20,000 tons a year, so there’s a decent chance you’ll find some in whatever you eat next today.

Artificial flavor: Denotes any of hundreds of allowable chemicals such as butyl alcohol, isobutyric acid, and phenylacetaldehyde dimethyl acetal. The exact chemicals in flavorings are the propriety information of food processors, and they use them to imitate specific fruits, spices, fats, and so on. Ostensibly every ingredient hiding under the blanket of “artificial flavor” must be approved by the FDA, but because you have no way of knowing what those ingredients are, there’s no way you can avoid something you’d rather not eat.

“Boston kreme filling”: Take notice of the “k” in “kreme.” That’s a not-so-subtle acknowledgment that there’s no actual dairy in this filling. Bavarian cream, the real stuff, is made with milk, eggs, cream, and whipped cream. But those are high-dollar ingredients that require special storage accommodations, so Dunkin’ Donuts stocks its doughnut case with a loose interpretation. Gone are the famous ingredients that make Bavarian cream a deeply satisfying and memorable indulgence, and in their place is a crude sludge made mostly from palm oil, modified food starch, and two types of syrup. If it weren’t for the “natural and artificial flavorings” injected alongside it, your tongue wouldn’t pick up much besides fat and sugar. 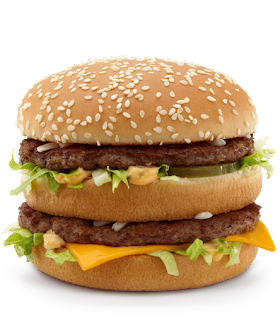 “100% pure USDA inspected beef”: The fact that McDonald’s beef is “USDA inspected” isn’t surprising; it would be illegal to sell it otherwise. By dropping this trivial detail onto the official ingredient statement, McDonald’s seems to be trying to distance itself from the criticisms facing industrially processed beef. What are those criticisms? For starters, the cows killed for industrial beef are routinely treated with antibiotics, a practice that cuts costs for farmers but leads to resistant strains of bacteria that doctors can’t effectively treat. But what’s equally odious—and less acknowledged—is what happens to this antibiotic-fueled beef after slaughter. Before making its way onto the value menu, fast-food beef passes through the hands of a company called Beef Products, which specializes in cleaning slaughterhouse trimmings traditionally reserved for pet food and cooking oil. The fatty deposits in these trimmings are more likely to harbor E. coli and salmonella, so Beef Products cleans the meat with the same stuff the cleaning crew at Yankee Stadium might use to scrub the toilets—ammonia. Every week, Beef Products pumps some 7 million pounds of ground beef through pipes that expose it to ammonia gas that could potentially blind a human being. The tradeoff is that we don’t have to worry about pathogens, right? Wrong. According to documents uncovered by the New York Times, since 2005 Beef Products’ beef has tested positive for E. coli at least three times and salmonella at least 48 times. Yet, despite the obvious flaws in the process, the USDA doesn’t require chains to disclose whether their beef has been treated with ammonia. The inspection is a good start, but we want transparency, too.

Ammonium sulfate: Don’t confuse this with the ammonia gas used to clean meat. Ammonium sulfate is inorganic plant food, otherwise known as fertilizer. Plants require nitrogen to grow, and ammonium sulfate supplies the nitrogen. McDonald’s uses it for precisely that reason. In order for bread to rise, it relies on yeast, which is technically a fungus, and by adding ammonium sulfate, McDonald’s nourishes the yeast and speeds the baking time of its iconic Big Mac bun. Plus, it helps the bun develop a nice, golden hue, so it appears to be more wholesome than a white-bread burger.

Calcium disodium EDTA: This compound is complex, but here’s all you need to know: It’s really good at gathering metal ions in liquid. This gives it many functions, but in food, the trait allows it to prevent microscopic pieces of metals from discoloring or spoiling the liquid.

Big Mac sauce: Mickey D’s so-called “secret sauce” turns out to be more prosaic than years’ worth of myth and mystery suggest. Soybean oil combines with egg yolk to make mayonnaise, which is in turn spiked with mustard, high-fructose corn syrup, and pickle relish. Surprisingly enough, the pink hue appears to come from two relatively nutritious spices, paprika and turmeric, not ketchup as most people assume. While a few of the industrial additives (like propylene glycol alginate, a thickener derived from kelp, and hydrolyzed corn and soy vegetable proteins) creep us out, it’s a relatively innocuous concoction. 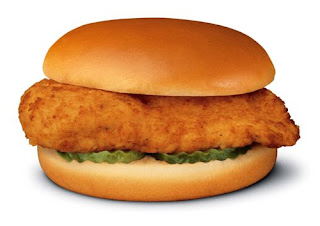 Sodium/Salt: More than three-quarters of the sodium in the American diet comes from processed, packaged, and prepared foods, and here’s a perfect example of why. Salt is undoubtedly the predominant source of dietary sodium, but by no means does it act alone. Think back to high school chemistry: Sodium is the element represented by the symbol Na. By attaching itself to other elements, it forms compounds. In the case of salt, that compound is sodium chloride (NaCl). But that’s just one of the sodium sources in this sandwich. The chicken alone, before you add bun and pickles, delivers three other sources: monosodium glutamate (C5H8NNaO4), baking soda (aka “sodium bicarbonate,” CHNaO3), and sodium stearoyl lactylate (C24H43NaO6). Some sodium compounds are added for reasons other than flavor, but by and large, your taste buds are the target. That’s why fast-food chains regularly brine their patties, and in many instances they rely on mechanically operated syringes to drive sodium deep into the muscle tissue. Ideally, most people in America wouldn’t consume more than 1,500 milligrams of sodium in any given day, but with 10 sources of sodium in this sandwich, it packs in 1,410 milligrams on its own!

TBHQ (tert-butylhydroquinone): An organic preservative that also can be found in dog food, perfumes, varnishes, and resins. Due to potential links with cancer and DNA damage, the FDA limits the use to 0.02 percent of the oil or fat in any single food item. Studies on its long-term safety have been contradictory, but as with all dubious additives, it’s best to limit your exposure whenever possible.

Dimethylpolysiloxane: This is a silicone-based antifoaming agent commonly added to deep-fried foods to keep the oil from turning frothy. Outside the kitchen you’ll find it in a range of products, from shampoos to Silly Putty. While no adverse health affects have been identified, there’s something undeniably unsettling about the thought of Silly Putty in our chicken.

Blue #1 (brilliant blue): In an effort to make listless food look more appealing, processors regularly add artificial coloring to everything from breads and crackers to fruits and vegetables. The reason is simple: They know that we taste first with our eyes. The problem is that many artificial colors have been linked to health problems. The Center for Science in the Public Interest recommends caution in consuming brilliant blue and avoidance of its cousin indigotin (blue #2) because they’ve been loosely linked to cancer in animal studies. And two British studies implicated the dye along with yellow #5 (also in Chick-fil-A’s pickles) as possible causes of hyperactivity in children. But as long as it’s legal and it makes food look pretty, don’t expect fast-food companies to stop coloring anytime soon.
Posted by Maura at 6:24 AM