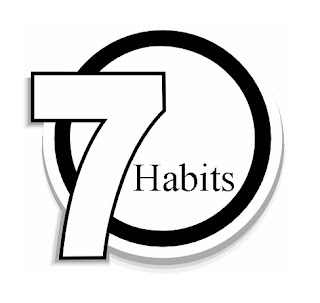 Have you ever noticed that some people seemingly eat whatever they want and don't gain weight? Those are the people that you know order dessert when you go out to eat, or they seem to enjoy the foods that you and I look at and gain a few pounds? Frustrating.

Over the past year plus, I started quietly observing a few people in my life like this. I tried to note the subtle differences of their eating habits compared to my former ( and occasionally current... ) ones. I discovered that many naturally slender people actually follow a relatively Clean diet more than 75% of the time.

The 7 Habits of Naturally Slender People

1. Naturally slender people eat breakfast: Day in, day out - they eat a generous portion of food for breakfast. It is not a meal to be skipped, or worked through. They eat fruit, protein, and a complex carbohydrate in the morning to fuel their bodies and kick start their metabolism. It's pretty simple - if your body is busy digesting food, your metabolism runs higher.If you have more energy, you will move more. Read more: Breaking out of the breakfast rut.

2. Naturally slender people balance their meals.  They understand that if they enjoy a plate of spaghetti and meatballs with garlic bread, the next few meals after that spaghetti will be light: fruit and vegetable centric, and they'll be mindful of temptations for the short term. Naturally slender people also ( consciously or unconsciously  - I've yet to figure this out ) eat a balance of fruits, vegetables, meats, and carbohydrates. They graze among the items on their plate and instead of focusing on eat all the steak first, then the potato, then the green veggie - they have a small bite of each item and end up eating most of every item on their plate ( but generally not all! )

3. Naturally slender people don't eat a lot late in the day.  They eat a vast majority of their daily food before about 3-4 in the afternoon, and then eat a light dinner. Naturally slender people enjoy their food during the day when there is a higher potential for that food to be burned for energy. They don't eat a large, late dinner and then sit on the couch until it is time for bed.

4. Naturally slender people drink water, tea, or coffee over soda.  This was something that surprised me - but then again, it didn't. I know some slim people who drink soda. I know some overweight people who only drink coffee. But as a generalization - slender people drink a spare amount of carbonated beverages and instead opt for water, tea, or coffee. The next time you are in the grocery store and see someone with a lot of soda in their cart - note if they are overweight or slender. You'll see both - but more often, you'll note they are overweight. Read more: 3 Reasons to Rethink that Diet Coke

5. Naturally slender people practice portion control. They don't sit and eat something tasty until they have to unbutton their pants or get uncomfortably full. They don't have seconds, thirds - and sometimes fourths. They don't have multiple servings of a "border food" or something that is a real "once in a very long while" treat - they have small, reasonable portions of everything they eat. A steak isn't a pound of meat; it is 4-5 ounces. A serving of rice doesn't fill a quarter of your plate; it is the size of 2 golf balls put together. Read more: Visual guide to portion control

6. Naturally slender people shy away from high sodium, high fat foods on a regular basis.  This doesn't mean they always turn down a serving of french fries - but more often than not - they will only have one or two - not a full large plate full. When given a choice between a fatty, salty appetizer and one that is more wholesome ( say, deep fried mozzarella sticks versus a salad )  - they will either take the salad or skip the appetizer all together.

7. Naturally slender people don't eat empty calories; they focus on nutrient dense foods. Again, I have yet to decide whether this is an unconscious or conscious decision on the part of naturally slender people - but they seem to gravitate towards those foods that are nutrient dense and give a lot of nutritional value for the food quantity they are consuming. They eat whole grain breads instead of white bread, They eat bright and colorful salads with a variety of vegetables and meat for protein rather than an iceberg lettuce salad with some carrot shavings on it drowning in salad dressing. And - they drink alcohol sparingly, if at all.


Adopting these habits has really helped me see what I was doing wrong for so many years. I didn't eat a lot - I just ate poor combinations, without thought for what I had eaten the meal before. I wasn't well hydrated, and I gravitated towards high fat, high salt foods. This has been a real revelation for me. I wasn't just eating poorly - I was eating wrong. I believe slender people naturally "eat to live" instead of "live to eat." Having changed my focus to now view food as fuel for my body only - the years of poor nutrition are behind me, and for the first time in my life I'm in control of my weight. 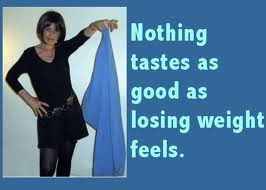