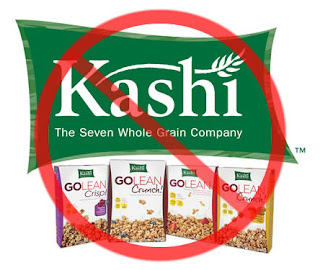 But wait, it gets worse. MUCH WORSE.


The Kashi class action lawsuit alleges that some of these synthetic ingredients are even listed by the FDA as prescription drugs, irradiated substances, pesticides that are a by-product of uranium mining, and federally declared hazardous substances.

Here are just a few examples from the lawsuit of ingredients that have been included in Kashi’s products and claim to be “all natural” or contain “nothing artificial”:

- Phytonadione (Vitamin K) has not been listed by the FDA as generally recognized as safe as a food additive. Its injectible form is listed as a prescription drug.

-  Bromelain is an enzyme derived from pineapple. According to the National Library of Medicine’s Hazardous Substances Data Bank (HSDB), its production requires acetone, which is a hazardous synthetic substance.

- Sodium Molybdate has not been declared to be generally recognized as safe by the FDA. According to HSDB, molybdenum salts are by-products of uranium mining and can be found in fertilizers for leguminous crops, citing American Conference of Governmental Industrial Hygienists.

A blogger on Greenit all.com recently wrote about Kashi's use of GMOs in their cereals labeled as organic and natural. GMOs are not permitted in any product labeled with the USDA Organic stamp. Right click on the Greenitall.com link and open it in a new browser - well worth the read.

Some of the items cited are specifically because they contain GMOs - so take that portion for what you will.

Kashi Heart to Heart Blueberry Cereal was found to contain organophosphate pesticides implicated as causes of neuropathy in humans.

"Natural" Kashi Golean Honey almond Flax was found to contain malathion in the wheat and chlorpyrifos and piperonyl butoxide in the almonds both which are prohibited in organics due to their neurotoxicity and hormone disrupting ability in mammals.

WHY SIGNIFICANT FOR ORGANIC CONSUMERS?
A logical question that one may be asking right now is “Ok, they’re cracking down on ‘all-natural’ advertising but what does that have to do with organic?”
The answer is very simple.
Many consumers mistakenly believe that “natural” is superior to and healthier than “organic”. Yet, this is absolutely not the case.
If, however, as a result of these lawsuits, “natural” is no longer unfairly exploited and people soon realize that “natural” doesn’t really mean much at all, organic food can only benefit.

They will soon realize that the healthiest food available is organic food.

If you'd like to read the entire class action lawsuit filed in California as a PDF click here!
Posted by Maura at 6:34 AM