Almond butter rocks - I mean, seriously...it is delicious stuff. I've tried Justin's Maple Flavored Almond Butter and love it to bits. I've also tried Archer Farm's ( Target brand ) almond butter and loved that, too. But almond butter is incredibly calorie dense. At about 100 calories per tablespoon, a little more than a scoop of almond butter will have you staring at the scale with a scowl on your face.

Imagine my surprise when I heard about DIY almond butter. I was skeptical, I was dubious - but I had to try it.
I went to the grocery store and bought a small bag of almond meal ( it wasn't really easy to find, but ultimately found it at a store that has a large organic / natural selection ), and brought it home to meet the almond milk in my fridge. 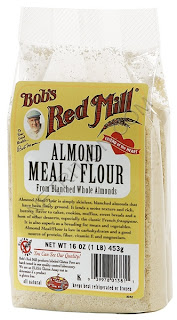 The results were delightful! The mock almond butter is about 45 calories a tablespoon compared to the real thing, which is 100 calories. NICE!


Directions
Mix almond milk and almond meal until combined. If the mixture seems too thin, toss it in the microwave for 30 seconds until thick. You can also add less liquid and/or throw the mixture into the refrigerator until thickened. Add sweetener ( stevia, preferably ) to taste as desired.

The recipe begs to be fiddled with, too. Cinnamon? Sure! Maple syrup? Can do! ( just be aware you're going to jack the calories up with the sugar... ) Cardamom? I bet it would be delicious.

Thanks so much, Food Fiasco.com
Posted by Maura at 6:31 AM