A Thought From My Weekend... 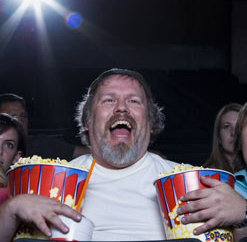 On Sunday, my boys took me to the movies for Mother's Day. We saw The Avengers ( All Hail Joss Whedon ) and I thoroughly enjoyed the rare movie theater outing with my family - and I enjoyed the movie, too. The theater we went to is an old one, and the seats aren't like those Barcoloungers in the Metroplex style theaters built today. It's an old school theater - small seats, small aisles. The last time I was physically in this theater - I was overweight. I remember being so incredibly uncomfortable in the seats. Today, I sat in the seat more than comfortably, and didn't give it a second thought...until I noticed the people around me.

Please, reserve judgement until you finish reading this post.

To my left, in the same row I was in a few seats down from me was a really large man. He had a large bucket of popcorn that he was eating almost compulsively. I mentally noted he didn't seem to be tasting or savoring the popcorn. It was mechanical. Hand, popcorn, mouth, repeat. Absolutely no thought going into the literally hundreds of calories he was consuming.
( Researchers found movie theater popcorn offerings range from 400 to 1,200 calories, with one to three days' worth of saturated fat and up to 1,500 milligrams of sodium. Make it a combo and add 300 to 1,110 empty calories worth of candy and another 150 to 500 calories from a sugary soft drink to wash it all down. ) And in the middle of the movie, this man got up with the bucket, went to the lobby, and got a full refill of his tub of popcorn.

In front of my husband but down a few seats was a really large woman. Literally - and I'm not being mean - I have no idea how she got herself into the seat. She was that big. Her actions during the movie were on the verge of distracting. She had boxes of candy in her purse ( along with the theater popcorn she had bought ) and when she polished off a box of candy, she'd wait 5 minutes or so, reach down, and grab another box. This went on for the 2 1/2 hour duration of the movie.

I had a really good weekend, nutrition wise. I've eaten almost perfectly Clean for the past 2 weeks or so, and had a likewise stellar weekend. I wasn't about to unwind it over a few minutes of movie theater popcorn, so I pointedly did not reach out to have a handful of my son's popcorn during the theater.

About 7 years ago, I smoked cigarettes. About a pack a day. I was feeling awful, and slowly but surely weaned myself down to just a few cigs a day. Finally North said to me "If you are only smoking one or two a day, you should quit." - And I did. For the first few weeks after quitting, the sight of someone with a cigarette would make me instantly crave it. But as I got farther and farther away from my last cig - I noticed the sight of  seeing someone smoking was repulsive. Absolutely nauseating. The physical act of raising a cigarette to the lips, drawing in smoke, blowing it out - repulsive. I knew I'd never smoke again.
I was over my addiction.

Today I had another of those moments. The sight of these people mindlessly eating, mindlessly gorging- it was repulsive to me. Not them, mind you. The eating. I  saw, with perfect clarity, who I used to be. I saw people not in control of their eating response. I saw people eating without thought or regard to consequence. It hit me, very hard - how far I've come. As we walked out of the theater, my husband asked me what part of the movie I liked the best. I told him that it was the realization that I'll never allow myself to be overweight again. He squeezed my hand, and said "The lady in front of me?" and I nodded. He had seen her. I wasn't just being sensitive. Others had seen - and that made me feel even worse for that poor woman.

About 32 million more Americans will become obese by 2030, upping obesity rates to 42 percent of the U.S. population, according to a new report from the U.S. Centers for Disease Control and Prevention.
The report also predicts that the proportion of Americans who are severely obese, meaning more than 100 pounds overweight, will reach 11 percent, about double the current rate.CDC Obesity Predictions for the US by 2030 - ABC News.

Watching the conveyor belt of junk food to mouth I witnessed today, it once again struck me. I knew I'd never be overweight again.

I am over my addiction.