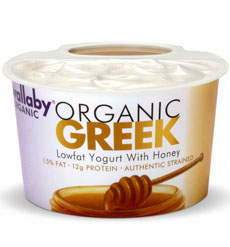 Over the weekend I had the bad fortune to have to visit my local phone store; my phone is having issues. I was told to wait an hour while the techs looked at my phone. I sighed, looked out the store window...and remembered there is a Whole Foods store I love to visit
( but never get the chance to! ) just down the street. I bought waaay too much stuff, including 2 "new to me" yogurts - one of them being a cup of Wallaby organic Greek yogurt. Once again, I tried the honey flavored variety.

I appreciated that this is a completely organic product, and the 2 ingredient list puts it head and shoulders above just about every other commercially available Greek yogurt out there: Organic cultured milk, and probiotic cultures. This was a lowfat yogurt - not no fat - and the nutritional data reflects it: 180 calories in the cup, with 30 grams of carbs. I believe much of that sugar content comes from the honey.

Wallaby has a side cup to stir in the honey or fruit that comes with it - similar to Fage. If you have trouble mixing the yogurt with the side well flavor - check out this little trick I learned! I tasted the plain yogurt before adding the honey- tangy! Very easily 4 out of 5 on my tangy scale. I don't think I'd like eating this plain - but with the honey mixed it, I found the tang significantly tamed.  The yogurt itself is thin - unlike any Greek yogurt I've encountered before.The serving size is 5.3 ounces - just under the "normal" 6 oz cup size you find elsewhere. I find the smaller size a little psychologically challenging. I know it is not much of a difference, but somehow, I get the feeling I haven't eaten as much and find the 5.3 ounce cups don't satisfy.

Wallaby, based in Napa Valley, California, is known for its creamy, pudding-like yogurts which they call Australian-style, a term we’ve not come across elsewhere. We’d call them custard-style, French-style or Swiss-style . The founders were inspired to make the yogurt while enjoying many a yogurt in Australia.

A press release notes that “Once the founders had decided [to make Greek yogurt], they tried every brand of Greek yogurt that they could get their hands on. When they were done, they ultimately concluded that there just weren’t any organic Greek yogurts out there that tasted really great. What followed was an intense effort of repeated trial and error, to come up with what they ultimately felt would be a Greek yogurt unmatched in taste.”

I found the yogurt to be tasty, but I felt the honey really over powered the yogurt taste. If I have another cup of this, I'll remember to put in less honey next time. ( I think I instinctively added too much thinking I'd counteract the tangyness. ) It was good - thin, but good. If this is what is called Australian type yogurt, I think I'll stick with my regular Greek yogurts. It wasn't bad...but I think I prefer the thicker consistency of Fage, Chobani, and even my local Giant's store brand.
Posted by Maura at 6:56 AM