How do I know the Greek yogurt business is booming in America? Every time I go to the grocery stores in my area, I find a different brand to try. This time up, Olympus Greek yogurt and Cabot brand Greek yogurt. 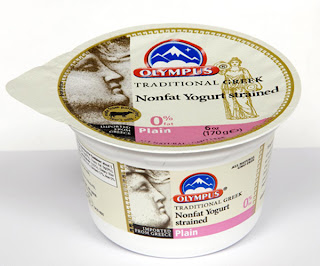 Olympus brand Greek yogurt caught my eye and captured my attention not just because it is organic and hormone free, it is actually manufactured in Greece and imported. Now, this to me isn’t a plus. Being manufactured in Greece isn’t the problem – the fact that I am eating not sourced “locally” is a little more troublesome. I recognize that my Chobani is manufactured Upstate New York – and nowhere near local…thinking about this little $1 cup of yogurt flying in from Greece is…odd.
By far, Olympus brand has been the thickest and creamiest I’ve tried so far. It was like eating something halfway the consistency of whipped cream cheese and sour cream. Very rich tasting, though it has 0% milk fat. Tangy too – about a 3 out of 5 – but it very well may be because I had plain instead of vanilla. However, I added fresh sliced strawberries to it and found it much more interesting to eat that way.
Would I buy it again? I’m hesitant to answer that. It was good. If it were made a little closer to home, it would be better. If it were vanilla, it would be better. It didn't seem to cost more than the other brands, comparatively - even for being imported from Greece. It was good, but I admit not being overwhelmed by it. 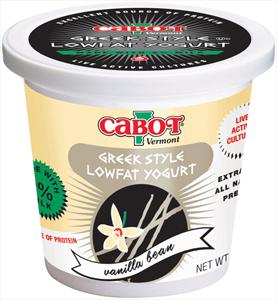 The second brand I tried is Cabot brand 2% vanilla flavored. I ate the 2% plain kind, because that is what my store carries right now. Calories are high – 220 for the little cup. That alone was off putting. I was excited when I opened the cup, because the product I saw was flecked with vanilla bean - a very good sign! However, my interest waned significantly once I realized how much like ranch dressing it looked like! That was off putting sense #2. When I tasted it - I instantly thought one thing: vanilla pudding. It tastes all the world like vanilla pudding. NOT like Greek yogurt, at all. I ate only 1/2 of the portion because I really didn't care for it. I wanted yogurt. Instead, I got Jell-o pudding. Strike 3 - you're out. To make matters worse, I ate it with a banana sliced into it - and if I had some Nilla wafers, I would have had an excellent dessert.