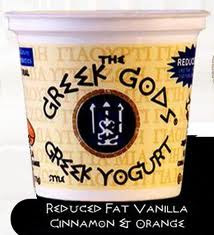 This week, I was able to secure a cup of another brand of Greek yogurt that I haven't previously tried ( thank you, John! ) - The Greek Gods brand reduced fat Greek yogurt. I tried the vanilla cinnamon & orange flavor, shown above.

This stuff was flat out delicious. From the first moment I opened the container, I was instantly aware of the heady cinnamon vanilla smell this yogurt has. It isn't particularly tangy ( 2 out of 5 on the tangy scale ) but was a much creamier product than I anticipated. It has a smooth mouth feel, and a pleasant but not overwhelming orange flavor to it that is delicate and makes for a really unique flavor combination.

While eating it, I thought that this brand and flavor in particular would make for a delicious dessert parfait - layered with granola and fruit - it would be a delicious treat. As it was, with my morning banana cut into it, the yogurt was delicious as well.

I was very pleased with the ingredient list: milk, cane juice, vanilla, cinnamon, pectin, and yogurt cultures. No chemicals, nothing odd - and the milk is from cows not treated with hormones. While it technically isn't organic, it is a pretty clean product. 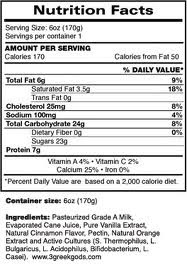 The Greek Gods brand doesn't appear to make a 0% fat Greek yogurt. The "high test" yogurts have 17-19 grams of fat. That is a lot! The vanilla cinnamon orange flavor I ate is a reduced fat kind, and has 6 grams. Hopefully, they will come out with a zero percent variety. I know I'd buy it regularly if they did.