The manipulation of the American public through advertising is something that interests me so much more now that I'm so in tune with what I'm eating. I'm so much more aware of advertising gimmicks and smoke & mirrors.

In an effort to reinforce the healthy benefits of eating oatmeal, PepsiCo ( who owns Quaker Oats ) has given the Quaker Oats Logo a bit of subliminal manipulation: the Quaker Oats guy is thinner, with no double chin. His cheekbones are flatter, his face less round. 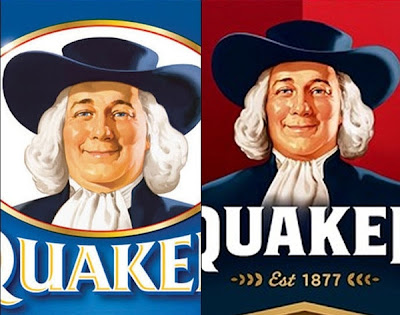 The Quaker Oats man has undergone a cereal makeover.
The smiling, white-haired man will be sporting a slimmer face, broader shoulders and tamer hairdo.
PepsiCo Inc., which owns the 134-year-old brand, chose to put the sweet-faced mascot on a diet to help consumers associate the products with “energy and healthy choices,” Justin Lambeth, Quaker’s chief marketing officer, told The Wall Street Journal.
They were careful to keep him jolly and inviting — no chiseled cheekbones or Botoxed grimace — but they axed his double chin and gave him a more flattering haircut.
“We took about 5 pounds off him,” said Michael Connors, the head designer of the firm hired to give the Quaker Oats man his new look.

It's funny how standards change over time. When they first thought him up, being fat was probably still a symbol of prosperity and health. In an effort to make you think "healthy" - they gave their logo a leaner look.