Milk - It Does A Body Good? 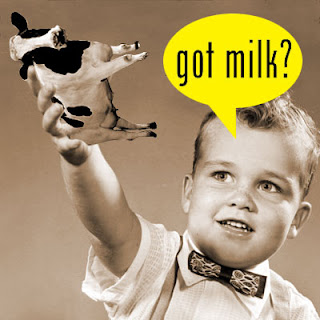 For some, milk is a questionable item. Think about this:

Humans are the only creatures on the planet that regularly drink the milk of another species, and also the only species that drinks milk past childhood/infancy.

If you chose to consume milk, that is perfectly ok - it is a personal choice, and one that I've decided is right for me, too. I don't drink a lot of milk, but put it in my coffee, and regularly eat dairy products like yogurt and cheese.

There are, however, alternatives to cow's milk. You may have noticed them in the stores, but never tried one. Here's a quick overview of what is available.


Soy milk
Pro: Made by soaking soybeans and grinding them with water, soy milk is rich in protein and calcium and has no saturated fat. It also scores low in calories and comes in many flavors. It's another good alternative for lactose intolerant people.

Con: Soy products can inhibit protein and mineral absorption, offsetting its health benefits. "We still need more research to figure out where it's going to have its place," she said.
Studies investigating soy’s role in breast cancer have yielded mixed results. Some findings suggest a substance in soy acts as a hormone in breast cells, fueling increased cancer risk.

Goat's milk
Pro: A staple in much of the world, goat's milk is more easily digested by some because its protein molecules are sized differently than cow's milk. It packs as much calcium as whole cow's milk and contains more tryptophan, an essential amino acid.

Con: Goat's milk contains lactose, eliminating it as a choice for some. And its distinct taste — a combination of sweet and salty — can be offensive-  as can its strong odor.

Almond milk
Pro: Made from ground almonds mixed with water and sweetener, almond milk has become quite popular in the last several years. It shares several properties of dairy milk: Both have a wide variety of vitamins and minerals, and a comparable fat content. Almond milk also has a rich, nutty taste and comes in several flavors, making it an attractive alternative for those allergic to dairy or soy.

Con: Protein is sparse in almond milk, with only 1 gram per cup, compared with 7 and 8 grams for soy and cow's milk, respectively. It's not suitable for those with nut allergies and lacks the B vitamins in cow's milk. Some almond milk has substantial amounts of sugar added, making it worth a peek at each brand's ingredient list.

Rice milk
Pro: Made from ground rice, this type of milk is very low in fat and calories. It also comes in plain or vanilla flavors and is lactose- and soy-free.

Con: Nutritionally, rice milk falls short compared with other varieties. It lacks Vitamins A and C, and contains very little protein. It should rarely be chosen thinking it's going to provide some superior nutritional health benefit.

Coconut milk
Pro: Made from ground coconut meat and juices, this milk is rich, creamy and tasty and is a mainstay of Indian and Thai cooking. Its fats are more easily digested than those in dairy milks, and coconut milk is low in cholesterol.

Con: Watch your waistline — coconut milk has a whopping 467 calories per cup. It's also low in calcium and protein and high in saturated fat. It's definitely an indulgence.

Thanks, msnbc
Posted by Maura at 6:25 AM