Bisphenol A ( more commonly referred to as BPA ) is widely used in the linings of many canned foods and beverages as well as in many hard plastic containers and thermal receipt paper. BPA has been in use for over 50 years, and is often used to make plastics hard and shatter-resistant. It's also used to coat metal items like the inside of food cans, bottle caps and canned drinks. You can find BPA in plastic baby bottles, sports equipment, compact discs, water bottles, medical equipment, dental sealants, eyeglass lenses, electronic devices, paints, and countless other consumer products.
BPA leaches because the ingredients used in producing polycarbonates and epoxy resins are just loosely bound enough that they break down under heat or when damaged. 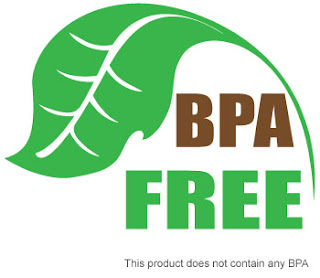 Seven U.S. states have banned BPA in some products ( infant products, specifically - Connecticut, Minnesota, Maryland, Massachusetts, New York Wisconsin, Vermont, and Washington State ) , Denmark and France have restricted it, Canada designates it a "toxic chemical," and Germany warns consumers to avoid it. I found this list online, and was quite taken aback by the number of large food companies that still use BPA in packaging. To be fair - most companies do have plans to phase out BPA. However, most have set the phase out date far in the future - some as late as 2020.

I found this helpful visual over at Rubbermaid to be of use. Nice to see a company pointing out exactly which products they make are BPA Free.

The U.S. Food and Drug Administration has expressed "some concern" about BPA's potential effects on the brain, behavior and prostate gland of fetuses, infants and young children but has not banned it. Specifically, scientists believe BPA consumption especially among women of child bear age is strongly cautioned - the effects of BPA are cumulative, and perinatal exposure to BPA has significant risks to the unborn child.

How are recyclable plastics marked?

Why is this connected with Clean Eating?  Clean Eaters try to eliminate unnatural things from our consumption - and quite clearly, BPA is one we can easily avoid if we take some common sense steps and make a few key swap outs. Most of us have a plastic water bottle within arm's reach at all times. That bottle must be BPA Free.

If you're concerned about exposure to BPA, follow these simple suggestions from the National Institute of Environmental Health Sciences:
As there is a clear link between heat and BPA leakage from canned products, aim to keep your canned goods as far from the stove as possible, in a cool pantry with good air flow to lower the ambient temperature. Don't heat water in the microwave in plastic containers, and make sure all food containers you use in the microwave are labeled "BPA-Free"