Clean Eating In the News: Arsenic in Apple Juices 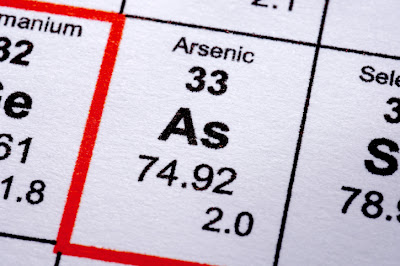 This post is taken verbatim from the Consumer Reports website: Arsenic in Apple Juice . I've edited out for brevity some passages that give certain background information or aren't as relevant to the information. If you'd like to read the article in its entirety, click the link above.


Arsenic has long been recognized as a poison and a contaminant in drinking water, but now concerns are growing about arsenic in foods, especially in fruit juices that are a mainstay for children.
Controversy over arsenic in apple juice made headlines as the school year began when Mehmet Oz, M.D., host of “The Dr. Oz Show,” told viewers that tests he’d commissioned found 10 of three dozen apple-juice samples with total arsenic levels exceeding 10 parts per billion (ppb). There’s no federal arsenic threshold for juice or most foods, though the limit for bottled and public water is 10 ppb. The Food and Drug Administration, trying to reassure consumers about the safety of apple juice, claimed that most arsenic in juices and other foods is of the organic type that is “essentially harmless.”
But an investigation by Consumer Reports shows otherwise. Our study, including tests of apple and grape juice (download a PDF of our complete test results), a scientific analysis of federal health data, a consumer poll, and interviews with doctors and other experts, finds the following:
Our findings have prompted Consumers Union, the advocacy arm of Consumer Reports, to urge the FDA to set arsenic and lead standards for apple and grape juice. Our scientists believe that juice should at least meet the 5 ppb lead limit for bottled water. They recommend an even lower arsenic limit for juice: 3 ppb.
“People sometimes say, ‘If arsenic exposure is so bad, why don’t you see more people sick or dying from it?’ But the many diseases likely to be increased by exposure even at relatively low levels are so common already that its effects are overlooked simply because no one has looked carefully for the connection,” says Joshua Hamilton, Ph.D., a toxicologist specializing in arsenic research and the chief academic and scientific officer at the Marine Biological Laboratory in Woods Hole, Mass.
As our investigation found, when scientists and doctors do look, the connections they’ve found underscore the need to protect public health by reducing Americans’ exposure to this potent toxin.


What our tests found

We tested juice from bottles, cans, and juice boxes that we bought in three states. We went shopping in Connecticut, New Jersey, and New York in August and September, buying 28 apple juices and three grape juices. Our samples came from ready-to-drink bottles, juice boxes, and cans of concentrate. For most juices, we bought three different lot numbers to assess variability. (For some juices, we couldn’t find three lots, so we tested one or two.) In all, we tested 88 samples.


Five samples of apple juice and four of grape juice had total arsenic levels exceeding the 10 ppb federal limit for bottled and drinking water. Levels in the apple juices ranged from 1.1 to 13.9 ppb, and grape-juice levels were even higher, 5.9 to 24.7 ppb. Most of the total arsenic in our samples was inorganic, our tests showed.
As for lead, about one fourth of all juice samples had levels at or above the 5-ppb limit for bottled water. The top lead level for apple juice was 13.6 ppb; for grape juice, 15.9 ppb.

The following brands had at least one sample of apple juice that exceeded 10 ppb: Apple & Eve, Great Value (Walmart), and Mott’s. For grape juice, at least one sample from Walgreens and Welch’s exceeded that threshold. And these brands had one or more samples of apple juice that exceeded 5 ppb of lead: America’s Choice (A&P), Gerber, Gold Emblem (CVS), Great Value, Joe’s Kids (Trader Joe’s), Minute Maid, Seneca, and Walgreens. At least one sample of grape juice exceeding 5 ppb of lead came from Gold Emblem, Walgreens, and Welch’s. Our findings provide a spot check of a number of local juice aisles, but they can’t be used to draw general conclusions about arsenic or lead levels in any particular brand. Even within a single tested brand, levels of arsenic and lead sometimes varied widely.

Arsenic-tainted soil in U.S. orchards is a likely source of contamination for apples, and finding lead with arsenic in juices that we tested is not surprising. Even with a ban on lead-arsenate insecticides, “we are finding problems with some Washington state apples, not because of irresponsible farming practices now but because lead-arsenate pesticides that were used here decades ago remain in the soil,” says Denise Wilson, Ph.D., an associate professor at the University of Washington who has tested apple juices and discovered elevated arsenic levels even in brands labeled organic.

Over the years, a shift has occurred in how juice sold in America is produced. To make apple juice, manufacturers often blend water with apple-juice concentrate from multiple sources. For the past decade, most concentrate has come from China (PDF). Concerns have been raised about the possible continuing use of arsenical pesticides there, and several Chinese provinces that are primary apple-growing regions are known to have high arsenic concentrations in groundwater.
We also wanted to know whether people who drink juice end up being exposed to more arsenic than those who don’t. The resulting analysis of almost 3,000 study participants found that those reporting apple-juice consumption had on average 19 percent greater levels of total urinary arsenic than those subjects who did not, and those who reported drinking grape juice had 20 percent higher levels.

The answer? Buy local. Do you have apple juice / apple cider produced in small batches within a few hundred miles of your home? Buy that. If you drink a lot of apple juice, or regularly have it in your house - look for locally produced alternatives. You can be more assured that the product does not have a banned chemical, or a harmful additive. Have a little one at home? This is a decision you'll have to make. Juice consumption for toddlers is supposed to be really controlled. They are probably better off without much ( if any ) fruit juice - but that is a personal decision each parent needs to make after weighing the pros and cons.
Posted by Maura at 6:05 AM