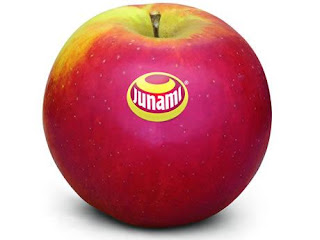 Seeking out new fruits and vegetables has become a sort of hobby of mine - my own little "Where's Waldo?" as I roam the fresh fruits area. I guess I can't be terrible surprised when a young grocery employee shyly approached me at the store over the past weekend and told me to come look in a front bin. He had received a shipment of Junami apples and he knew I'd be interested.
Well of course I was!
Junami is a cross between Ideared and Maigold with Elstar, originally cultivated in Switzerland but now grown here in the US. The fruit has a wonderful, almost perfectly round shape. Some apples appear to be red colored mottled with green. Others are green shot with flecks of red. A beautiful apple, and fairly heavy for its size. Why? The Junami's trademark: juiciness. This apple was bursting with apple juice - so much so that it gave the taste of the apple a crispness not unlike the taste of apple cider that has been sitting in the fridge a bit too long gets - a picky, sparkly taste that means the apple cider is turning to apple jack.

It was delicious and extremely satisfying. I will definitely buy these again if I see them - Junami apples are available now in various U.S. markets, and will be for three to four weeks while supplies last. They build flavor in storage between the fall harvest and release in January. So these are a limited time only apple. Look for them at your grocer today.

Apples have been found to contain a unique substance called phloridzine, which apparently is only found in apples. Phloridzine sees to it that part of the sugars you eat are not digested. So if you eat an apple it will curb you appetite and fill your stomach... but it won’t make you fat! What’s more, your body can’t ‘access’ the sugars in apples as well as those in, for example, candy. Your body has to use more energy to free up the sugars in apples and that is why an apple is a much smarter choice for a snack than a chocolate bar or other sweets. Do you often eat apples and also choose a Junami? Then we have great news for you! Research has shown that a Junami contains twice as much phloridzine as other apples. By the way, the highest concentration of this special substance is in the peel!