Clean Eating In The News: McDonald's Confirms It - No More Pink Slime

Remember this post of mine back in November about the "pink slime" or mechanically separated chicken that looks like pink slime? 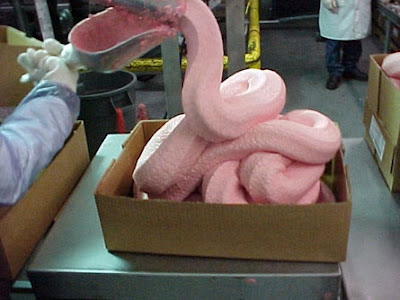 McDonald's announced last week that, as of last August, is has stopped using ammonium hydroxide in the production of its hamburgers. MSNBC reports that the chemical, used in fertilizers, household cleaners and even homemade explosives, was also used to prepare McDonalds' hamburger meat. This is the process by which meat processors get every last potential "edible" bit from processed meat.

So, what moved McDonald's to make the change in their hamburger production? In a statement posted on its website, McDonald's senior director of quality systems Todd Bacon wrote:


"At the beginning of 2011, we made a decision to discontinue the use of ammonia-treated beef in our hamburgers.  This product has been out of our supply chain since August of last year. This decision was a result of our efforts to align our global standards for how we source beef around the world."

The U.S. Agriculture Department classifies the chemical as "generally recognized as safe." McDonald's says they stopped using the chemical months ago and deny the move came after a public campaign against ammonium hydroxide by celebrity chef Jamie Oliver.


The food industry uses ammonium hydroxide as an anti-microbial agent in meats, which allows McDonald's to use otherwise "inedible meat."

On his show, Oliver said of the meat treatment: "Basically we're taking a product that would be sold in the cheapest form for dogs and making it 'fit' for humans."

Even more disturbing, St. Louis-based dietician Sarah Prochaska told NBC affiliate KSDK that because ammonium hydroxide is considered part of the "component in a production procedure" by the USDA, consumers may not know when the chemical is in their food.

"It's a process, from what I understand, called 'mechanically separated meat' or 'meat product,'" Prochaska said.  "The only way to avoid it would be to choose fresher products, cook your meat at home, cook more meals at home."

I know you don't eat at McDonald's or other fast food chains - but the idea of your meat partially being that pink slime above is nauseating!


http://news.yahoo.com/blogs/sideshow/mcdonald-confirms-no-longer-using-pink-slime-chemicals-171209662.html
Posted by Maura at 6:57 AM