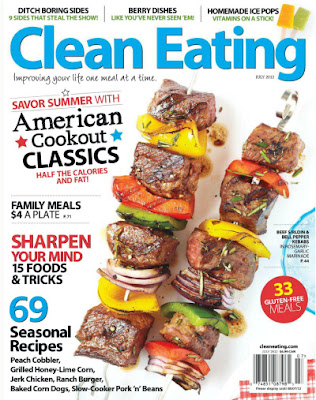 The July issue of Clean Eating magazine is hitting newstands now, and it's got several great recipes and articles in it.

First and foremost - my sincere condolences to Tosca Reno and her family on the passing of her husband, Clean Eating Publisher Robert Kennedy who passed away a few months ago ( but it was just announced now ). Your husband was a powerful motivator for me - through both Clean Eating magazine and Oxygen magazine - I get both magazines each month and they never fail to lift my motivation and resolve. Thank you.

This month's issue has some really awesome tips in it.

1. Page 23 - 3 things to do with leftover taco meat ( yeah, there is always some leftover! ) I don't use the prepackaged taco seasonings anymore- instead opting to mix my own. Healthier, and less sodium too. But I'd never thought to put a tablespoon or three of leftover taco meat in an omelet. Huh!

2. I personally don't feel that the hot dogs profiled in the "Supermarket Guide" are any more nutritious or Clean because they are "uncured" ( Check out this post I wrote in September 2011 about nitrates ) with celery juice powder, which has the exact same effect as a "cured" hot dog - except from a natural source, not a chemical one. In my opinion, these uncured hotdogs aren't Clean, and should be avoided.

3. I love bell peppers, and like the step by step tutorial on how to roast them on page 31.

4. Page 44 - the recipe and directions to make the kebabs shown on this month's front cover. YUM!

5. Best article this month hands down is the 9 recipes for simple summer side dishes that are Clean, light - and visually vibrant. Make one of these for your next cook out or the next tie you are asked to "bring a side" to a party.

6. And from the "You learn something new every day" file - a terrific explanation of why canola oil ISN'T Clean on page 93. ( I had no idea it was actually so heavily processed with chemicals! ) Check that short explanation out - I had no idea. Now I know.
Posted by Maura at 3:00 PM