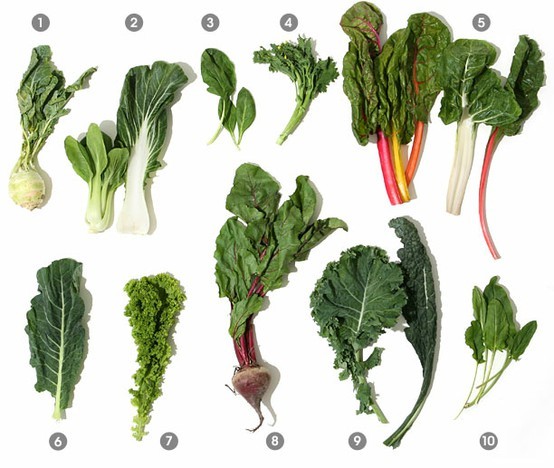 Alternate name: Cabbage turnip (Kohlrabi is the German word for it)
Characteristics: German for "cabbage turnip," this vegetable—reminiscent in shape of a hot-air balloon— is usually found in the marketplace with the stem and leaves still attached to the bulb. The bulb can be eaten raw or cooked, but the leaves do need to be cooked before serving. The easiest method to prepare the leaves is to separate and discard the ribs and then sauté the leaves in olive oil and garlic. The bulb has been incorporated into cuisines around the world, from India to Germany, but it is primarily in the southern part of the United States that the leaves are consumed, usually prepared in a manner similar to collard greens.

Alternate names:Chinese white cabbage, pak choy, pak choi, white mustard cabbage
Characteristics: Chinese cuisine has made this cabbagelike vegetable popular. Bok choy has a tender and mild flavor, especially the immature baby bok choy, shown on the left. Part of baby bok choy's appeal is that you can cook the small vegetable whole, without breaking its leaves apart, thus adding a beautiful visual element to a dish. When cooking larger, more mature bok choy, cut the leaves from the stem and cook the stems first, since they will require a slightly longer cooking time.

Characteristics: Though originally from Persia, this is one of the most common greens around and can be eaten both raw and cooked. Baby spinach, pictured on the right, is ideal in salads because it is so delicate and has a milder, less bitter taste than other greens. If you plan to cook spinach, purchase more than you think you'll need, since cooking reduces its volume drastically. Unlike the other cooking greens in this guide, spinach is good for mixing with other foods—its flavor isn't overpowering, and its delicate nature requires little preparation and a shorter cooking time.

Alternate names:Broccoli rabe, rapini, cima di rabe, turnip broccoli, Italian turnip, brocoletti di rape, choy sum
Characteristics: Don't let the name mislead you: This veggie is not a member of the broccoli family but is in fact related to the turnip. Often used in Italian and Chinese cooking, this leafy green vegetable with small florets is increasingly popular in the U.S. Use broccoli raab to balance a dish and add a dash of natural bitterness.

Alternate names: Swiss chard, Silverbeet, Mangold spinach beet, leaf beet, sea kale, white beet
Pictured left to right: Rainbow, white, and red
Characteristics: This vegetable makes a bold statement with its large, thick, dark leaves and colored veins and stalks. The leaves taste somewhat like a more intense spinach, although the texture of chard leaves is nowhere near as smooth—or as soft. Don't discard the stalks: They have a mellow flavor. The stems and the greens are best prepared separately to prevent the leaves from getting overcooked.

Alternate names: Collard greens, borekale, tree cabbage, or nonheading cabbage
Characteristics: A member of the cabbage family and closely related to kale, collard greens are often associated with Southern cooking in the United States. Typically they are cooked along with ham, pork, and various vegetables, as well as with other greens, such as kale. Collards have Mediterranean origins and pop up in plenty of cuisines.

Alternate names: Curled mustard, American mustard
Characteristics: The frilled, curly edges of this chartreuse green help make it stand out in a crowd. The seeds are used to make the condiment mustard. In the United States, mustard greens are an integral part of Southern cuisine, usually cooked or mixed with other cooking greens, like kale and collards. There are a number of Asian varieties, such as dai gai choy, bamboo mustard, and green-leafed mustard, all of which look nothing like the American version but still contribute a peppery bite to any dish.

Characteristics: If you happen to purchase beets with the stems and leaves still intact, don't discard the leafy tops. The leaves' minerally taste will complement the root's sweetness. If they are young, beet greens can be eaten raw; otherwise, cook them as you would any other dark leafy green.

Alternate names: Borecole, cow cabbage, kail
Pictured, left to right: Curly and Tuscan (also known as black kale, dinosaur, lacinato, cavolo nero)
Characteristics: Kale, another form of cabbage, has leaves that look like they're a mix between collard and mustard greens. As with many other dark leafy greens, kale tastes slightly bitter when eaten raw, but unlike some of its relatives, cooked kale won't lose its general shape or texture, nor will its volume reduce dramatically. For whatever reason, many cuisines pair kale with potatoes.
Thank you, Epicurious!
Posted by Maura at 7:07 AM