Every Thursday through Lent, I am going to highlight a fish you may not be familiar with, and a Clean Eating recipe that will use that new fish in a Clean manner. I feel that trying new foods and new cooking methods is important. Sometimes, stepping out of your comfort zone ( in many aspects of life, not just food ) leads one down a new path they may not have considered. If you are one to eat no meat on Fridays during Lent, consider this a challenge to keep in line with your beliefs and expand your horizons. If Lent isn't your thing, that's great too - consider this challenge on any night of the upcoming week, and enjoy some different CE fish.

( Thanks to CE reader North for the suggestion! )

Swai is a species of Vietnamese catfish, which due to intense lobbying from the American catfish industry is prohibited to be sold under the word "catfish" because of sales concerns. It is also known as Iridescent Shark, and sometimes sold under the name "Basa" which usually denotes a more expensive fillet. The word Swai is thought to be the Thai word for this fish.

Swai taste very similar to American catfish. It is a firm, tender white fish that can be prepared a number of ways. It can sometimes have a rather pronounced pinkish stripe running along the fillet; don't cut it out; it is simply a skin tone variation and is perfectly edible.Most swai you get in stores these days is farm raised; not wild caught - and easily 50% of the catch is grown in the US.


Here is a dish of Bengali origins that looks as good as it tastes. The tumeric is fragrant and flavorful; the broth it makes accentuates the swai wonderfully.

Swai in Turmeric-Chili Gravy with Tomatoes 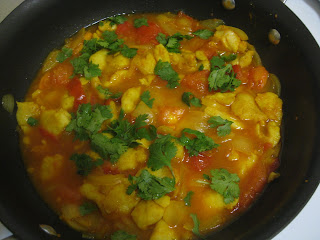 You'll Also Need:
a bowl or zipper storage bag in which to marinate the fish, a deep nonstick skillet, a plate or tray on which to hold the cooked fish while making the gravy, aluminum foil

1. Sprinkle the fish pieces with 1/2 tsp. of the turmeric and 1 tsp. of the salt. Mix these three items together well, then let the mixture sit in your fridge for about 30 minutes before using.
2. (Optional) While the fish is blending with the spices, cook your rice. (Brown rice usually takes about 30-40 minutes, so mine was done before I started cooking the fish.) Fluff the rice with a fork, then cover until ready to eat.
3. Pour enough canola oil into the skillet as to coat the bottom.
4. Add the fish to the skillet and saute on medium heat, stirring occasionally, until just cooked. (If you're not using a non-stick skillet, my mom recommends coating the fish pieces in a little all-purpose flour to keep them from sticking.) Remove the fish from the skillet, place on a plate or tray, and cover with aluminum foil to keep warm.
5. Add the onion and saute on medium heat for about three minutes.
6. Add the tomatoes, the remaining 1/2 tsp. of turmeric, and 1/2 tsp. chili powder (or more, to taste), to the skillet, and saute on low heat for about 3 minutes.
7. Add 1 cup of water and the remaining 1/2 tsp. of salt and increase the heat to high. When it starts boiling, lower the flame, then add the fish back into the skillet. Simmer for about 3 minutes.
8. Turn off the flame. Garnish with cilantro.
9. (Optional) Serve over a bed of brown basmati rice.


Thank you, saagAHH.com
Posted by Maura at 6:27 AM