This recipe is from Clean Eating magazine April/May 2011 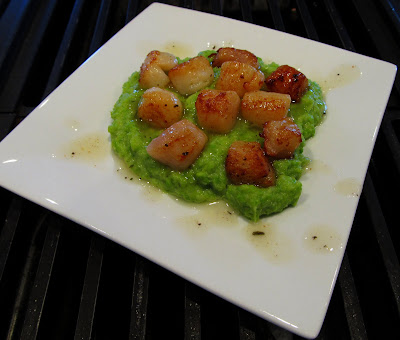 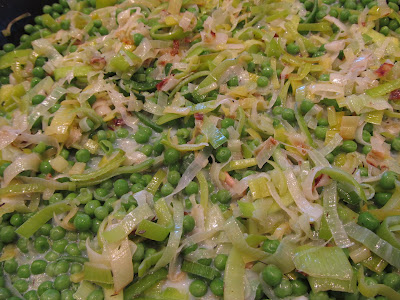 1)  Heat a skillet on medium-low. Add 1 tsp oil and swirl to coat skillet. Add leeks and 1/8 tsp salt and cook, stirring occasionally, until leeks are softened and just starting to brown. Add thyme, peas, and milk. Increase heat to medium and cook, stirring, until peas are heated through, about 5 minutes. Remove mixture from heat.

2) Scrape pea-milk mixture into a blender and puree until smooth, adding a bit more milk to thin, if necessary.

3) heat a large clean skillet on medium-high. Add 1 tsp oil and swirl to coat pan. Add scallops, leaving a bit of space between each to prevent steaming.  Sear scallops for about 3 minutes per side, until golden brown and barely firm to the touch.  Transfer scallops to a plate.

5) To serve spoon 1/2 cup pea puree onto each of 4 plates and top with scallops.  Spoon 2 tsp vinagrette over top of scallops and serve. 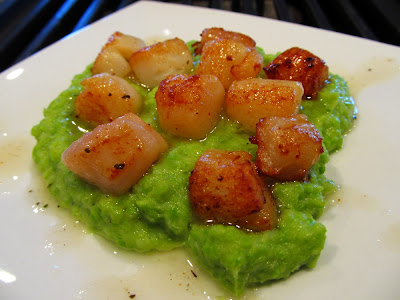 Review: I quite liked this recipe! I changed a little, though. I had 4 leeks rather than 2 so I just fried up that much more and added it as if the recipe called for 4. My wife wasn't sure what to pick up for scallops, so she grabbed the little ones rather then the jumbo scallops. The jumbo may have been better, but the little ones were fine.

My wife is not a big fan of scallops, but she really liked this recipe. My teenage son saw that there were peas in the puree and didn't want any. I served the plate that I photographed to him, so he had no choice but to try the 'green stuff'. He not only liked what I served, he dished himself some more.

I modified the sauce a little bit, too. I added a little ground cayenne pepper and fresh black pepper to give it a little zing.