Last week, I went back to the same grocery store where I found those delicious Sonya apples.
Not seeing any, I asked the young man who was restocking some vegetables about the apples. He informed me he had heard their fresh fruit and vegetable buyer was trying out different and new varieties of apples, and that Sonya shipment was part of that experiment. They didn't have any more left - but they did have a new apple : the SweeTango. Having never tried it, I immediately picked up a bag.

I served it to my family alongside our dinner that night - and we all liked it very much. Extremely crunchy, with a crisp taste that wasn't overly as sweet as I expected from the name.

My husband observed "This is what I remember Red Delicious apples as being like when I was a kid." - and he was correct. Though not a variant on Red Delicious, it reminded me of what I thought of when I ate a Red Delicious.It was crisp, with an interesting sweet/sour mixture of flavors.

SweeTango® is a variety of apple that began gracing store shelves in fall 2009. A cross between the popular Honeycrisp and Zestar! varieties, SweeTango delivers its own unique flavor, crunch and tasting experience. The name SweeTango reflects the harmonious flavor combination you experience upon first bite. 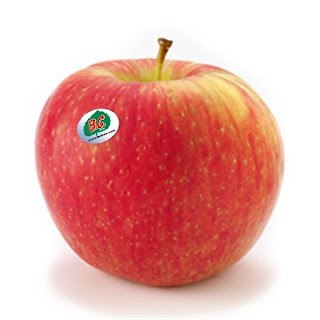 Flavor – Juicy and sweet with hints of fall spices, SweeTango®’s flavor, balanced by vibrant acidity, dances to a long and satisfying finish on the palate. It also features the satisfying “crunch” of a Honeycrisp.

Origin – SweeTango is the brand name for apples produced by Minneiska trees, a cultivar developed at the University of Minnesota. Breeders spent more than a decade developing this distinct variety of apple. SweeTango is grown and marketed by Next Big Thing, A Growers’ Cooperative – a unique partnership of some of the most respected family-owned orchards in North America.

Appearance – SweeTango is a blush apple with deep red coloration over a yellow breaking background.

Availability – SweeTango is an early-season apple, harvested in late August and early September. The apples appeared in limited quantities in select markets in 2009 and 2010. Stores and markets across the nation will carry the apples in 2011.