After reviewing a few brands of Greek yogurt last week, I came across 2 more brands I had not previously tried or reviewed so I thought I'd give them the same taste test as before. Same rules applied: I bought the brand in the vanilla or honey flavor, 0% fat, and have rated the brands according to how I perceived their relative tartness and overall quality. 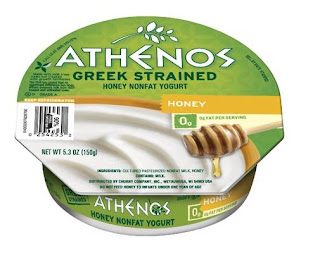 Like Fage, it has a little "well" next to the actual yogurt that holds the honey. You can dip it or mix it in. I was a little...I don't know...put off...that I was only getting 5.3 ounces of product, yet was paying about 30-40% more than some of the other brands I've tried. But I bought it anyway.  Calories? 160 - a little on the high side. Sodium? 50 mg. - again,. a little more than I'd like to see in such a relatively small serving of yogurt.
Athenos is actually organic ( made with milk from cows not given growth or milk stimulating hormones, or antibiotics ) so I consider that to be a plus.

Upon opening, I discovered the yogurt to be a pleasing thick consistency, with a nice but not unpleasant tanginess – about a 2.5 to 3 on my tang scale out of 5. Similar to the Fage – I discovered that mixing the honey well into the yogurt well is a little unwieldy and sloppy. If not mixed well, you end up hitting pockets of pure honey that can be a little disconcerting.
Overall, I liked the taste, and would buy it again if on sale…but I didn’t appreciate the difficulty in incorporating the honey into the yogurt. I think if I had other brands available to me, I’d consider them before Athenos.


The second brand I tried I found while shopping at Safeway : Open Nature. 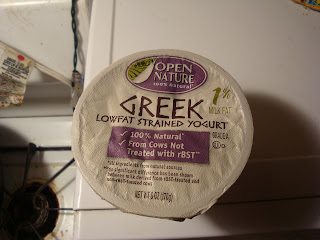 I admit, I scanned the label quickly - all seemed ok. So, I put a single cup in my cart and continued along. When I sat down to eat it, I examined it more carefully...Lucerne! Distributed by Lucerne! That is Safeway's house brand name. Oh, no - Safeway had duped me. Again! However, I was determined that I would give this brand a fair shake. Wow, am I glad that I did. Upon opening, the yogurt was clearly superior to its poor Lucerne cousin. It was rich and creamy - very enjoyable. It definitely is low on the tangy scale - like a 1.5 out of 5; similar to Chobani and good for the "beginner" Greek yogurt fan or those who do not like a real tangy yogurt. I will definitely buy this one again. I enjoyed the creamy consistency.

So there you have it - two additional brands of Greek yogurt tested - I'll keep my eyes peeled for new ones!
Posted by Maura at 9:46 PM