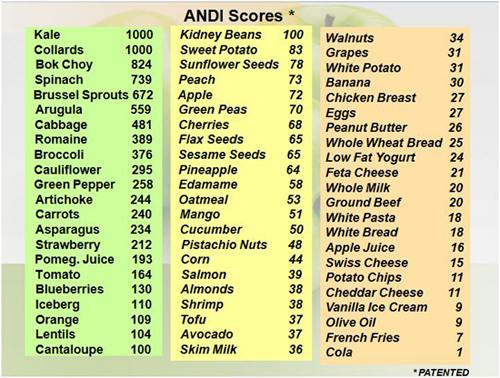 When incorporating Clean Eating into your lifestyle, obviously there are Clean foods that pack more of a nutritive punch than others. The chart above shows the "ANDI" or  the Aggregate Nutient Density Index of common foods. It ranks the foods according to its percentages of naturally occurring vitamins, minerals, and antioxidant capacity.
Some high end dietician talk:

To determine the scores above all known vitamins and minerals were considered and added in. Nutrient Data from Nutritionist Pro software for each food item was obtained for the amount of that food that would provide a 1000 calorie serving. We included the following nutrients in the evaluation: Calcium, Carotenoids: Beta Carotene, Alpha Carotene, Lutein & Zeaxanthin, Lycopene, Fiber, Folate, Glucosinolates, Iron, Magnesium, Niacin, Selenium, Vitamin B1 (Thiamin) Vitamin B2 (Riboflavin), Vitamin B6, Vitamin B12, Vitamin C, Vitamin E, Zinc, plus ORAC score X 2 (Oxygen Radical Absorbance Capacity is a method of measuring the antioxidant or radical scavenging capacity of foods).


Nutrient quantities, which are normally in many different measurements (mg, mcg, IU) were converted to a percentage of their RDI so that a common value could be considered for each nutrient. Since there is currently no RDI for Carotenoids, Glucosinolates, or ORAC score, goals were established based on available research and current understanding of the benefits of these factors. (limited references below). The % RDI or Goal for each nutrient which the USDA publishes a value for was added together to give a total. All nutrients were weighted equally with a factor of one except for the foods ORAC score. The ORAC score was given a factor 2 (as if it were two nutrients) due to the importance of antioxidant nutrients so that measurement of unnamed anti-oxidant phytochemicals were represented in the scoring. The sum of the food’s total nutrient value was then multiplied by a fraction to make the highest number equal 1000 so that all foods could be considered on a numerical scale of 1 to 1000.

Clearly, the foods in the green and yellow columns are Clean and would be excellent mix and match items for any Clean diet. Clean food items in the peach colored column have less of a nutritive impact. Chicken, grapes, and organic milk are clean items in the peach column. Should you avoid them? No - just be aware that ounce for ounce, there are other Clean foods that you would want to be including in your diet - so if you are eating more than 4-8 servings of chicken a week, you may want to adjust your consumption to have a more balanced and nutritionally fulfilling weekly diet ( or, recognizing that chicken breast is lower on the ANDI scale, pair it with choices from the other columns like tomatoes and white beans to ensure you are boosting your nutrition otherwise. )
Thank you, http://www.eatrightamerica.com/nutritarian-lifestyle/Measuring-the-Nutrient-Density-of-your-Food
Posted by Maura at 7:00 AM