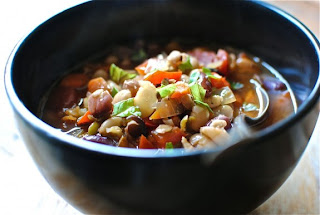 With Fall upon us, now is the time for warming soups and stews to take center stage. I've long been a fan of bean soup mixes ( just don't use that hideous seasoning packet they sometimes throw in there! ), and they are great for a crockpot.

Trader Joe's sells a nice bean mix that makes a delicious soup. The barley is a nice addition.
If you don't have a TJ's near you, any bean mix will do.


Toss the soaked bean/barley mix into a large pot. Add the broth and canned tomatoes. Bring to a boil.
In the meantime, heat the oil in a medium skillet. Add the onions, carrots, celery, garlic and red bell pepper. Sprinkle with Herbs De Provence, dried basil, a good pinch of salt and pepper.
Saute until veggies start to soften, 5 minutes.
Add the veggies to the soup pot. Add the bouillon cube, partially cover and simmer on medium for an hour.
If you need to add water at any point, toss a cup in.
Taste and season accordingly. If the beans need a little longer, simmer another 20 minutes.
Posted by Maura at 4:30 AM