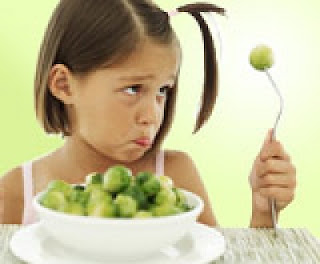 Have you ever wondered how you can absolutely adore a food but the person next to you despises it?   I sometimes think about things like this - especially when confronted with my potato hating son. How the offspring of an Irish woman and a Welsh man could hate potato ( and garlic! ) as much as mine does...I'll never understand.

I ran across this interesting round up of the most commonly disliked foods - and why you might dislike them.


Soapy Cilantro
This herb, popular in Mexican and Asian dishes, is surprisingly divisive (there’s even a website dedicated to cilantro-haters. “The aldehydes give cilantro its fragrance and give off that soapy smell and flavor, but some people find it pleasing.”

Bitter Brussels Sprouts
Although some people love these pint-size veggies, others can’t stand the odor of Brussels sprouts, which are a member of the cabbage family. Cooking Brussels sprouts releases a sulfur compound. The longer they’re cooked, the more it smells.

Texture-challenging Tomatoes
About 19 percent of American adults don’t eat raw tomatoes. That’s amazing given that they’re included in practically every salad and sandwich. For most, it's less of a taste issue than a matter of texture. Most dislike the firm flesh with the oozing insides.  It’s also rare for people to like both raw and cooked tomatoes with their wildly different textures.

Funky Fennel
Fennel’s strong licorice scent can be off-putting to some and refreshing to others.

Icky Eggplant
People who don’t like eggplant often can’t reconcile the tough-on-the-outside, mushy-on-the-inside texture.
It’s hard to cook properly. And eggplant can be chewy and is like a sponge, sucking in all the flavor.

Earthy Mushrooms
Mushrooms are grown in the ground so it’s no wonder that they have an earthy taste and are associated with dirt. People who get easily grossed out don’t like mushrooms, They have a hard time knowing what they are—that they’re a fungus.

Strange-Looking Raisins
There’s no delicate way to put this: Raisins resemble feces. .That may explain why many people can’t stand even the sight of them while they adore grapes (raisins are simply dried grapes).

A mixture of the natural compounds in ginger causes its characteristic and, in some cases, despised pungent odor and flavor (particularly with pickled ginger, which tastes like perfume or soap to some).

Off-putting Pulp
Although pulpy juice is associated with just-squeezed freshness, people who are fans of pulp often say things like they don’t want to “chew their juice.”

( btw - I'll cop to a strong dislike for ginger and fennel. Everything else I'm good with. )
Posted by Maura at 6:36 AM