Are Newman's Own Products Clean?

While I was researching this post on Clean Eating spaghetti sauce,  I discovered Newman's Own pasta sauces were definitely unclean. Added sugars, starches, and a lot of sodium. Then, I started researching Kashi - and discovered many of their "post-Kellogg's acquisition " products are Unclean - but the core products that built the company remain Clean. I started thinking about Newman's Own, again...and decided to do more research.

Newman's Own was started by actor Paul Newman and A.E.Hotchner in 1982. The brand started with a home-made salad dressing that Newman and Hotchner prepared and gave to friends as gifts. Since 1982, Newman's Own has donated all of its profits after taxes to thousands of causes and charities. In total since inception, the company has donated over $300 million to charity.

Despite Newman's death in 2010, the company remains in private hands, and has not been acquired by a larger food conglomerate.

Are Newman's Own products Clean? For the most part - no. They are not Clean. You have to examine each item carefully for the answer, however. They make everything from salad dressings, sauces, and marinades to frozen foods and cereals.

Their salad dressings, sauces and marinades are largely Unclean. There is a lot of added sugars and salts to these foods - immediately placing them in a "Border Food" at best category. Some contain things like corn syrup ( buried low in the ingredient list ) and xanthan gums to improve the texture of the product. While xanthan gums are low on my "That is Unclean" radar - almost every single product I checked has it in it.

However - there are far worse products on the market today, so if you chose to consume Newman's Own products, do so sparingly and with an eye on your water bottle. 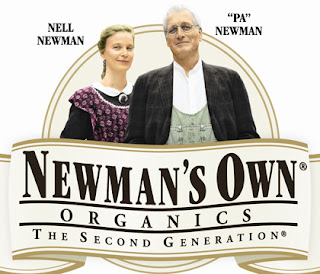 Newmans' Own eventually began a line spearheaded by Paul Newman's daughter Nell  that focused on organic products - almost exclusively snacks and treats, with some organic fare for your 4 footed friend, and a line of organic fair trade coffees.

Are Newman's Own Organics products Clean? The answer is a murky and somewhat hesitant "Ummmm..."
The answer - like Kashi's products - is taken on a case by case basis. Don't assume when you see the word "Organic" written boldly on a package that it means the product is Clean. It simply means the product was grown without hormones or pesticides.

When you examine many Newman's Own Organic products, you find that yes indeed, the ingredients are organic. But sugar is organic. So is salt. I picked up 20 or so Newman's Own organic products at random in the store and looked at the ingredients - cookies with high sugar content - in some cases, identical to Nabisco or Keebler cookies. Many of the products use corn syrup as a sweetener, and just aren't Clean.

Like Kashi, however...don't throw the baby out with the bath water, as they say. Examine each. for example, the Alphabet Cookies  are what I like to think of as a "Border" food. Something not eaten every day - but something to eat once or twice a week.

And as an occasional crunchy treat - Newman's Own Organic Soy Crisps are Clean enough for you not to be hating life afterward.

So- to sum up, you really need to inspect each food item individually - but as a round generic statement - Newman's Own food products are not good for Clean Eating - but some of their Newman's Own Organics snack products will be a welcome occasional treat.
Posted by Maura at 3:45 AM