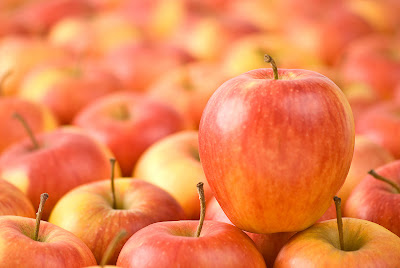 Pinata's heirloom parentage (it's a cross between Golden Delicious, Cox's Orange Pippin, and the Duchess of Oldenburg varieties) gives the apple a unique flavor. Pinata apples are crisp and juicy with all the classic apple flavors that you love, and a "unique tropical finish." I've found conflicting reports concerning the Pinata apple online. I've found reports that it was originally created in Dresden, Germany, I've seen a website that claims the Pinata variety is exclusive to their orchard,  but the apple I ate had a sticker on it that said it was from New York State.

I found the apple crisp and juicy, but I failed to detect the "unique tropical finish" mentioned above. To me, it tasted a lot like a Honey Crisp apple ( a common sweet apple available this time of year ) . According to other websites, the Pinata is most commonly found in stores from December to March. My apple was okay. Just ok. I can't say I heard swelling music in the background as happened when I tried Sonya apples for the first time.
As the Pinata apples were really expensive compared to the Honey Crisp, I believe I will stick with the Honey Crisp when I want a sweet apple. ( However, please note that I live on the East Coast, and Pinata apples I ate were grown in New York. These had to travel to get to me; hence the cost and perhaps the less than advertised taste. If you live on the West Coast or in New York,  you might find these apples very affordable and much more unique )
Posted by Maura at 10:30 AM