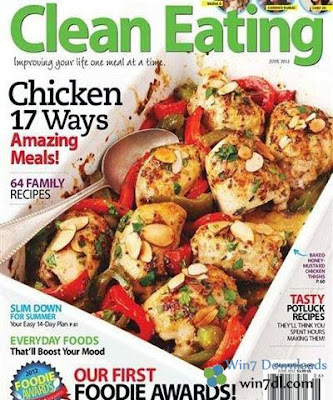 The June issue of Clean Eating Magazine is hitting newstands now. There seem to be a lot of snackie / borderline foods in this month's issue ( A CE version of a S'more? "Guilt Free Lime Cheesecake Squares" ? Seriously?? )

Here are the top other articles that caught my eye.

1. I like kitchen tools that are multi-functional. CE has listed multiple uses for a salad spinner that are actually do-able - straining yogurt for cheese, washing fruits and veggies. ( However, washing my delicate unmentionables in a salad spinner is a bit of a stretch, even for me. )

2. I like Robin Miller, a former Food Network chef who hosted a long running series called Quick Fix Meals with Robin Miller where she would cook once, but make 3 meals out of it ( for example , cooking a large chicken, and using the meat 3 ways ). Her 15 chicken recipes starting on page 45 are not overly step or ingredient heavy - but I personally prefer to see the list of ingredients at the top of the recipe, followed by step by step instructions. However, the Chicken Tetrazzini caught my eye, as did Chicken Sloppy Joes.

3. The recipe on the front cover looks tasty - Honey Mustard Chicken Thighs. I like to cook thighs; they are less expensive and
( in my opinion ) moister and more flavorful than white meat. I like the look of the cover recipe!

4. CE introduces their first ever "Foodie Awards" where they list the best Clean options for various categories in the grocery store. Among them: Chips/Crackers/Snacks, "Best Butters" ( meaning peanut or nut butters ), Noodles & Grains,  Breakfast Picks, Pantry Staples, Dairy, Frozen Foods, Sauces & Condiments, and Sweeteners. While a lot of their top picks are what I consider to be Clean - some are not. Use the list of foods wisely, read labels in the store, and judge whether a specific item is right for your specific pantry.

5. Last but not least - I was thrilled to see a friend of a friend highlighted as the CE chef of the month - Spike Gjerde, who with his brother ran one of my favorite Baltimore restaurants back in the day ( the long closed Spike & Charlie's ). He has another restaurant, Woodberry Kitchen in Northern Baltimore. He's focusing on locally sourced foods, and a much Cleaner food menu. Um - can you say "road trip?" Check out his Meatless Monday recipe: a navy bean casserole.
Posted by Maura at 6:44 AM