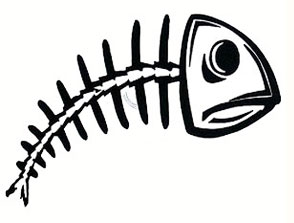 For a while now, I've been extremely conscious of the country of origin for the seafood I eat - I don't buy seafood raised and processed in Asian countries, and instead prefer to buy seafood that indicates it is wild caught, processed at sea, or farm raised in the US.

Questions you to ask before making a seafood purchase:
Food and Water Watch  has come out with an updated list of 12 seafood species to avoid, why you should avoid them, and better choices for the consumer who is concerned about where their seafood is produced and sourced. It's well documented that seafood raised outside the US is subject to questionable animal husbandry tactics ( antibiotics, growth hormones ), and seafood from Asiatic countries are particularly suspicious.

12 fish that fail at least two of our criteria for safe and sustainable seafood (the order listed does not reflect a ranking) The Food & Water Watch uses five major criteria when it comes to recommending seafood:
- Contaminants
- Status of the Stock
- Catch Method or Farming Method
- Economic/Cultural/Social Significance
- Key Species

Bluefin tuna poses a very high health risk due to high levels of both mercury and PCB contamination. Bluefin tuna are internationally overfished, nearly to levels of extinction. They are believed to be 80% or more below their original abundance levels. The eastern and western Atlantic Ocean stocks to which bluefin tuna are native are listed as “endangered,” and “critically endangered,” respectively, in the IUCN Redlist of the world’s most threatened species.

Imported catfish often come from Southeast Asia, where use of chemicals and antibiotics is barely regulated. Because the U.S. Food and Drug Administration inspects less than two percent of imported seafood, imported catfish may be contaminated with antibiotic, pesticide or bacterial residues.

Caviar, especially from beluga and other wild-caught sturgeon

The beluga sturgeon, also known as the European or great sturgeon, is found primarily in the Caspian and Black Seas. The beluga sturgeon can live for over 100 years and does not reach maturity until at least 15 years of age. As a result of its long lifespan and slow maturation, this species has low resilience and is vulnerable to overfishing. The salted eggs of the beluga sturgeon, known as caviar, are considered a delicacy. The demand for highly valued beluga caviar has led to overfishing and poaching of the species. The construction of dams as well as pollution has further diminished the population.

The Atlantic cod stock collapsed in the early 1990s and is currently undergoing overfishing. It is listed on the IUCN Red List of Threatened Species. This species is frequently caught using bottom or otter trawls, nets that drag along the seafloor, and can damage the bottom habitat and remove or cover animals and plant life. This fishing method also can result in the unintended capture of many other types of marine life (bycatch).

The American eel is known to have high concentrations of mercury and PCBs, toxic chemicals that can prove harmful to human health.

Most other Atlantic flatfish stocks are also seriously overfished. Atlantic halibut has been overfished off the coast of the Northeastern United States since the 1800’s. Despite management practices that currently prevent targeted fishing of Atlantic halibut and attempt to reduce bycatch of the species, the fishery has not recovered.

Although many varieties of crabs live in North American waters, the United States also imports crab from other countries. Often, exporters will sell crab caught here in the U.S. to other countries where they can receive a higher price, while importing cheaper crab, often from Russia, for local consumption in the U.S. Exacerbating the situation, much of the crab caught in Russia exceeds the total allowable catch, making it illegal.

Shrimp is the most popular seafood in the United States, but about 90 percent of the shrimp consumed in the U.S. is imported from other countries where seafood production and employment conditions are often not well regulated.

Orange roughy may contain levels of mercury contamination that pose a health risk for adults and children. Orange roughy are caught in the Atlantic, Indian and Pacific oceans with fisheries off the coast of New Zealand, Australia, Namibia, the Northeast Atlantic, and Chile. This fish is particularly vulnerable to overfishing due to its long lifespan and slow maturation.

Farmed salmon may contain levels of PCB contamination that pose a health risk to adults and children. It may also be contaminated with pesticides and antibiotics. Farmed salmon are usually raised in cages in open waters. These cages allow free-flow of anything from the farm into the wild, and promote transfer of diseases, especially sea lice, from caged to wild fish.

Chilean seabass may contain levels of mercury contamination that pose a health risk to adults and children. For nearly a decade, illegal fishing has plagued Chilean seabass populations, while killing seabirds by the thousands, including several species of endangered albatrosses.

Shark may contain levels of mercury contamination that pose a health risk to adults and children. Shark populations are vulnerable to overfishing, as they mature slowly and do not reproduce quickly. Sharks can be caught and killed by fishermen when targeting other types of fish.


If you'd like a PDF of this information - the Dirty Dozen and a list of alternative species to look for when shopping for seafood - click this link for a printable PDF.
Posted by Maura at 6:30 AM