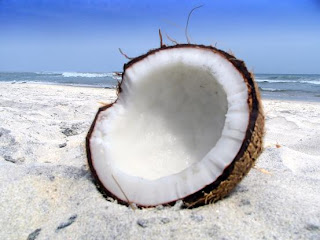 Recently I've been seeing many CE recipes calling for coconut oil in place of where you'd normally expect to see olive oil or vegetable oil. I've been wondering about coconut oil for some time now, so I decided to do some research on the topic and report back to you. I avoided websites that were clearly "Pro Coconut oil" for information - like "The Coconut Oil Research Council" :-\

This post is a cobbling together of information I've gleaned from multiple other sites: theundergroundbootcamp.com,
MSN.com,
Foodnetwork.com
The Seattle Times

One thing both sides agree on is that when coconut oil is hydrogenated it becomes a trans fat, and trans fats are bad news. Trans fats have been closely associated with heart disease because they not only increase LDL cholesterol but impede the body’s ability to utilize HDL.
Unless you are cooking with virgin coconut oil, the only coconut oil in your diet may be hydrogenated, since that’s the form it takes in snack foods and nondairy creamers.

Most old-school nutrition experts slam coconut oil because of its sat-fat content. Pro-coconut oil advocates, meanwhile, argue that the oil is easily absorbed because it’s a medium-chained triglyceride However, there’s strong evidence that suggests the various fatty acids found in coconut oil, including lauric, palmitic and myristic acid (all medium-chained triglycerides), raise both LDL (bad) and HDL (good) cholesterol and total cholesterol.

According to Thomas Brenna, a professor of nutritional sciences at Cornell University who has extensively reviewed the literature on coconut oil, a considerable part of its stigma can be traced to one major factor.
"Most of the studies involving coconut oil were done with partially hydrogenated coconut oil, which researchers used because they needed to raise the cholesterol levels of their rabbits in order to collect certain data," Brenna said. "Virgin coconut oil, which has not been chemically treated, is a different thing in terms of a health risk perspective. And maybe it isn't so bad for you after all."

Partial hydrogenation creates dreaded trans fats. It also destroys many of the good essential fatty acids, antioxidants and other positive components present in virgin coconut oil. And while it's true that most of the fats in virgin coconut oil are saturated, opinions are changing on whether saturated fats are the arterial villains they were made out to be. "I think we in the nutrition field are beginning to say that saturated fats are not so bad, and the evidence that said they were is not so strong," Brenna said.


Plus, it turns out, not all saturated fats are created equal. Marisa Moore, a spokeswoman for the American Dietetic Association, a nonprofit association of nutritionists, said, "Different types of saturated fats behave differently." 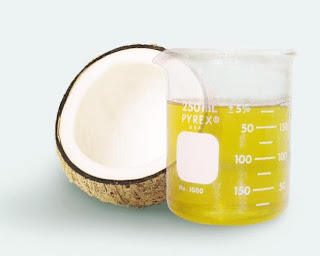 If you chose to include coconut oil in your CE diet...


How To Choose The Best Coconut Oil

Recently coconut oil has gained tremendous popularity in the west and has become readily available in most supermarkets. However, not all brands of coconut oil are of the same quality. In order to make sure you are purchasing the best coconut oil look for the following factors: