In the first of a series of posts that will encourage me to get my behind to my local Trader Joe's on a more regular basis, I am going to purchase a Clean item at TJ's and give it a review.

I've been a "nay-sayer" concerning protein and meal replacement bars for quite some time now. While the packaging and advertising try to promote a wholesome, nutritious, and often Clean outward appearance, most protein bars are anything but. Pick up any protein bar at the store, and find the ingredient list. It will be a little difficult, because in almost all cases, the manufacturer hides the ingredient list underneath the packaging flap! They don't want you to see the sugars and additives they have added! Most are extremely unhealthy - and really, only meant as a quick calorie addition for athletes ( which is what they were invented for - serious weightlifters, bicyclists, runners ...people who expend a lot of calories. Not people like you and I. )

Protein bars aren't Clean. But, along comes the Lara Bar. 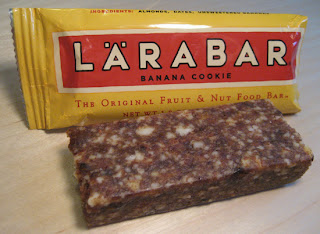 I had heard about these from a friend of a friend, but hadn't seen them in the stores to investigate until I hit my local Trader Joe's to prepare for this new blog series. I stopped my cart, and picked up a few of the bars. They are small, only 3 1/2" long by 2" wide. I flipped the Cherry Pie flavored bar over, and was floored. The ingredient list was on the side - NOT hidden under the wrapper fold. Completely and utterly dumbfounded. Ingredients? Just 3 - Dates, almonds, and unsweetened cherries. This is unheard of in protein bars. I picked up the Peanut Butter Cookie flavored bar. Ingredients? Just 3. Dates, peanuts, salt. It was the nutritional info that was hidden under the flap on the Lara Bar - and there was a little shock. Calories in these small bars?? 180 to 220. That is a lot!! However, for the simplicity of the ingredients, I was hooked.

I purchase 3 different varieties - Cherry Pie, Peanut Butter Cookie, and Apple Pie. All 3 I found tasty, though the overwhelming texture of the bar is from the dates in the mixture - but not the taste. The Apple Pie tasted of Apples, the Cherry of cherries. I happen to like dates, but some might not care for the texture. They are soft and chewy, and I think might be a good Clean "On the Go" supplement for the Clean Eater. Something to tuck into a desk to eat when your sweet tooth attacks. Something to eat with a piece of fruit for one of your mini meals. These would also be perfect to eat prior to going out for the evening, to help prevent cravings of inappropriate foods.

I will be on the lookout for Lara bar coupons from now on. I've seen a Buy 1, get 1 coupon previously. By the way, I think these would be excellent for your Clean Eating stockpile or for Clean Eating TEOTWAWKI.
With a long shelf life ( the ones I bought said "Best by late 2012 ), these would be great for keeping in an emergency preparedness stockpile.

These are apparently available at other retailers nationwide...I just found them at my TJ's first.
Posted by Maura at 6:32 AM