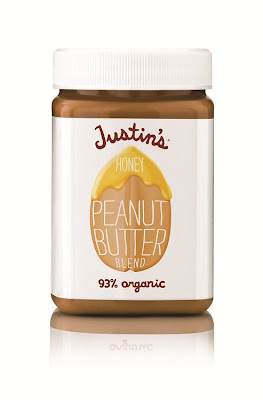 After I tried Justin's maple almond nut butter,  I started looking for this brand in the grocery store. I found it at my local Safeway, and was pleased they had several varieties - including a version of my son's favorite cocoa-hazelnut spread ( AKA Nutella ). I found small squeeze packs of single serve peanut and nut butters, too - including an organic honey peanut butter.
I'm a little bit "pro peanut butter" - I like it a lot. But other than not being organic, I found no reason to stop using the Skippy in my pantry. Ingredients are exactly the same as in the organic versions, and the salt and fat content is almost identical.
However, this Justin's peanut butter is delicious. It is less creamy than other commercial peanut butters - it is reminding you that hey - it is made from peanuts, after all. But it has a deep peanut taste, a smooth mouth feel with a nice "stick to the roof of your mouth" texture, and is not overloaded with salt. It has the same calories, sugar, and fat content as Skippy, but without the hydrogenated oils and 1/2 of the salt content of Skippy.
Once again - I'm sold on Justin's. A quality product, a Clean alternative.
Now, if I could only find coupons for it...
Buh bye, Skippy!
Posted by Maura at 7:11 AM