Have You Tried Jicama? 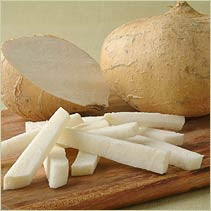 Jicama ( HICK-ah-muh ) is a crispy, sweet, edible root that resembles a turnip and contains a high amount of vitamin C, is low in sodium, and has no fat. One serving of jicama, which is equal to approximately 1 cup of cubed jicama or 120 grams, also contains only 45 calories.

It is actually a legume, and it grows on vines that may reach 20 feet (six meters) in length. The vines tend to hug the ground, terminating in tubers that may grow up to 50 pounds (22 kilograms) in size, although the majority of jicama roots sent to market are approximately three to four pounds (1.3-2 kilograms) in weight.

The skin is typically peeled before eating it raw. Raw jicama taste is crisp, sweet and nutty, similar to a pear or an apple, or a cross between an apple and a potato. As a snack it is delicious served sprinkled with lime juice and little chili powder.  When jicama is used in cooking it tends to take on the flavors of the ingredients that it is being combined with.

When choosing jicama at the store, look for medium sized, firm tubers with dry roots. Do not purchase jicama that has wet or soft spots, which may indicate rot, and bigger isn't better - because they may not be as flavorful. Jicama will keep in the fridge for about 2 weeks. 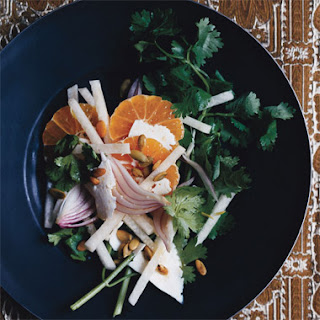 Mince and mash garlic to a paste with 1/2 teaspoon salt, then whisk together with lime juice, oil, honey, and 1/2 teaspoon pepper in a large bowl.
Just before serving, add clementines, jicama, onion, and cilantro and gently toss. Season with salt.
Sprinkle with cheese and pumpkin seeds.
Posted by Maura at 6:30 AM