Salad Bars: Helpful to Clean Eaters but Hard on the Wallet! 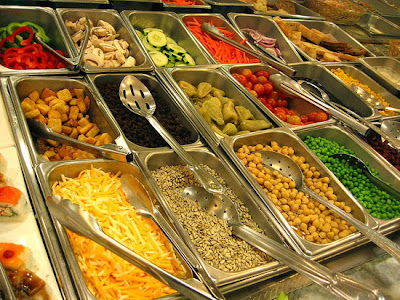 If you've ever stopped by your local grocery store for a quick Clean salad on your way home from work, you know the salad bar is both a best buddy and a mine field of occasionally Unclean choices. Skip the bacon bits, the cheese, the chow mein noodles. Yummy single quick salad of veggies on the go when you don't have time to make one at home.

But what about the money side of things? The average grocery store salad bar costs $5.99 a lb. What are the good deals on the salad bar, and what are you better off buying from the produce section and adding to your salad later?

A thank you to Food Network magazine where I found this list of the average markup on typical salad bar foods. Note - not all of these items are Clean. I've included the entire list, but only for informational purposes.

Marked Up but Still Affordable For Small Servings:

Items Not Worth Their Weight on the Salad Bar: Add at Home!