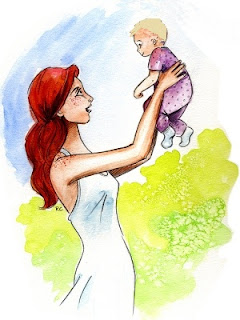 My son was 6 months old in September of 2001. A long wished for pregnancy that finally came to be and  despite the odds against us - a perfect little boy joined my family.

I was working nights then. My husband and I couldn't afford daycare, so I stayed home with our son during the day, and I worked evenings and weekends. For several years, my husband and I didn't see each other much.

September 11, 2001, I was walking through the living room with my son in my arms when something on the tv caught my attention. I stopped. I watched. I called my husband. I cried.

I remember sitting on the couch, watching the tv. Holding my son in my arms. He slept, he woke. I fed him. We didn't move from in front of the tv for hours. I remember hearing the sorties flying overhead. F-18s cruised the skies over DC.


By September 12th, the magnitude of the attacks was clear.


Later on that day, I looked down into the face of that beautiful sleeping child and I remember being profoundly thankful - perhaps for the first time in my life. Thankful for my family, my safety, my freedom.

Now, my sleeping baby is a rambunctious, gifted 10 year old. My thankfulness remains.

Life after the attacks. Coping with the sudden and swift change to our world view. Learning from mistakes and moving forward in a positive direction. Our complacency as a nation was exposed, and we closed ranks. Being reminded that soldiers, civil servants, the Government - they work for us. They didn't show just remarkable heroism: they did their jobs - the jobs they had quietly sworn to do - and for which we the civilian public had lost sight of. We were reminded.

Once again, love of country and pride was in the forefront - as it should be.